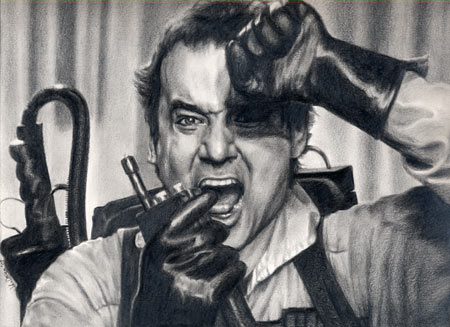 This drawing has been a long time coming. Back when I had done the drawing of Ray from “Ghostbusters,” I had wanted to also do this scene from the film. It’s when Bill Murray as Peter Venkman gets attacked by the ghost of Slimer. Iconic! I finally decided it was time to give it a shot and it was a fun project to say the least. Definitely happy to work on this one and get it done. I had started it the evening of October 23rd, 2009 and worked on it for about eight or so separate evenings, around two to four hours each session.

This drawing was done with the usual grades of pencil on a piece of Bristol board paper. I used 4H to lay it out and then stuff like 3H, H, HB, 2B, 3B, 4B, 5B and 6B. Finally, I used my preferred Ebony Jet Black pencil to get the blacks blacker — especially with the gloves. It was completed the morning of November 24, 2009.