Sorry for the inactivity on here. I’ve been busy with a ninth-month-old crawler, a sick guinea pig, a stolen Honda, and work. But in the midst of it all, I’m still trying to find regular time to work on drawings. I recently completed my first attempt at a portrait done entirely in marker. I drew it in pencil first, then went over it with a translucent sheet of marker paper using a variation of gray markers. It was fun and different for sure, but I saw mostly just its glaring flaws after I finished it, so I won’t be posting it here. 🙂

I did, however, follow that up with a pencil portrait, which I was also unhappy with, and then another pencil portrait which I actually WAS happy with! I’ll post a photo here, but I’ll try to get a HQ scan for the portrait archives soon. Using a plate from the party goods my parents got Amy for her birthday this year, I drew Johnny Depp as Captain Jack Sparrow. I worked on it on and off for about a month with a couple hours here and there (not every day though). It was fun and a neat project to work on. I have no other portraits planned at the moment, so I’ve returned to drawing cartoons. I recently exercised my nerdy-ness some more and picked up some new comic books that should make good sketch sources to stretch my abilities some. I’d love to get better at drawing people (in a comic-book-style).

In the meantime, here’s Jack… Actually, maybe I’ll even post the various stages the drawing underwent in a post here, hmm? Would that be interesting to anyone? I took various iPhone shots of the drawing in various degrees of completion…

(Here it is finished) 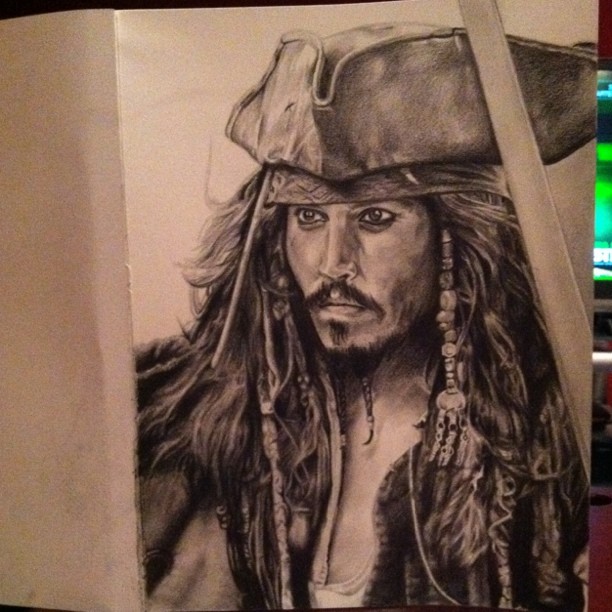 4 thoughts on “There should be a “Captain” in there somewhere…”

Tales from a Blick Store