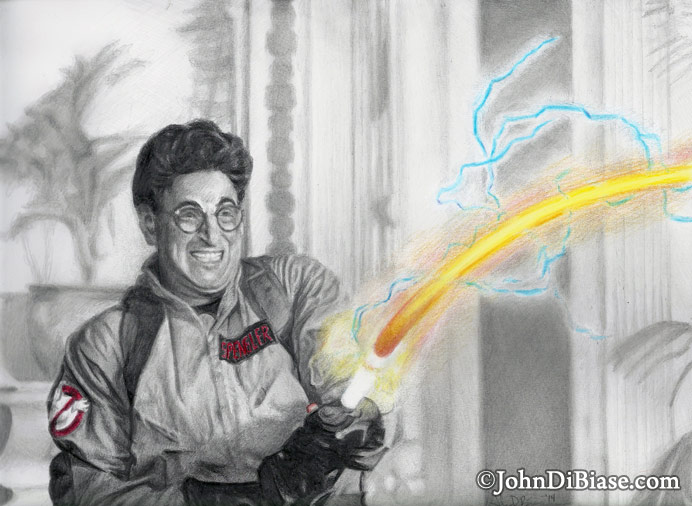 It’s no secret I’m a big Ghostbusters fan. The movie came out when I was very little and I actually remember going to see it in the theaters a couple of times. With the news last month that Harold Ramis, who played Egon Spengler, had passed away, I was pretty stunned. First of all, there’s been talk of a third movie for over a decade and the loss of Harold meant he couldn’t even make a cameo in it (should the movie ever come to pass). The other thing is, Harold “is” Egon. He went on to star in and direct lots of other movies, but he will always be Egon to me at least, and it stung to realize that the man behind the character has left us. It’s also a weird way of symbolizing the passing of part of my childhood, but, alas, that sounds more like a psychological thing…

I knew I wanted to do a second drawing of Egon, and one more so from the first movie, since the other drawing was from the second film, and I liked the idea of mixing color with the pencil again. Furthermore, I loved the idea of doing a screen shot from the movie and having the proton stream in it. I started this one and was pretty happy with it right away, but then my portrayal of his face started to irk me. I couldn’t get his wide-eyed expression right. It was to the point where I almost just tore up the picture and gave up. So I decided to set it aside for a few days. I started a new drawing and figured I’d come back to this after a break. I then decided to just scrap his face and use an expression from a few frames later in the same scene. So I did just that. I erased everything inside the outline of his face and started it over. Thankfully, that seemed to work, so I proceeded to detail it and the rest of him and then put the out-of-focus ballroom background in kind of lightly. I’m mostly pleased with the end result. 🙂