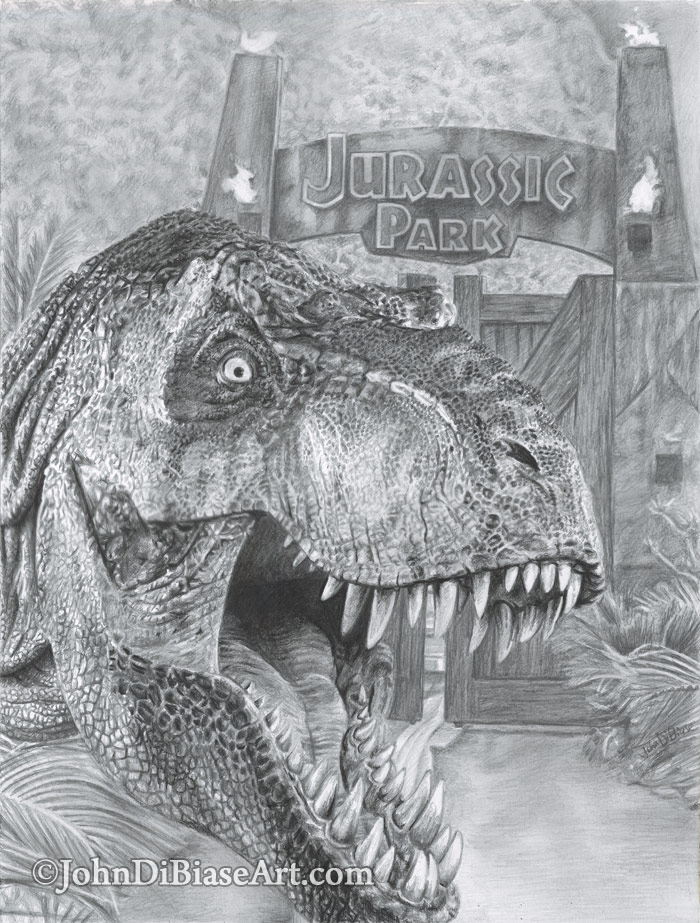 I first started getting more serious about drawing around 1993 or 94 — sometime after “Jurassic Park” came out. I loved the film and collected all of the trading cards and even had the “official movie magazine” about the film. In both the cards set and the magazine, the concept art from artist Mark ‘Crash’ McCreery was featured very prominently. His work on the raptors and t-rex were just mind-blowing and it wasn’t long before I tried my hand at replicating Crash’s work.

As a kid and amateur artist, I obviously couldn’t do Crash’s work justice, but it started something. It sparked something inside me that made me want to draw detailed pieces and try to draw people’s portraits.

A few years later, after I started to get the hang of it, I tried my hand at Crash’s t-rex side profile drawing again and it showed improvement, but it still wasn’t nearly as good as his work. And while I still can’t just fabricate detailed work right out of thin air (I need a drawing reference), after seeing 2015’s “Jurassic World” film, I felt inspired to do something original. I found a photograph of the t-rex animatronic puppet they’d used for one of the films and decided to try to do a detailed drawing of that. And since I draw freehand, it’s difficult to accurately place subjects in the drawing space. When I saw it coming together, I realized I’ll have a dead background without much happening, so I opted to use the screenshot of the doors from “Jurassic Park” as the background… above is the result. 🙂

Jim and Pam at Niagara “The Office” Freehand Graphite Drawing

More Original Pieces Up for Sale